Learn how to install Android Studio on Ubuntu 22.04 LTS Jammy JellyFish using Snap GUI or manually with the help of the command terminal.

To create Android apps, the developers can download an official free-to-use platform called “Android Studio”. It is based on the IntelliJ IDEA Community Edition development environment and therefore has a very powerful code editor and many very helpful development tools. This gives developers an alternative to the Android SDK, which essentially consists of Eclipse and the ADT plug-in. It is available to download and installs for Windows 10/8/7, macOS, Linux, and ChromeOS.

Android Studio comes with the development environment you can do the following things:

Here we are using Ubuntu 22.04 LTS, however, the given steps will be the same for other Ubuntu-based operating systems.

To install Android studio on your Ubuntu Linux system, you should have at least 2GB of RAM (8GB recommended); more than 4 GB of free disk space is recommended; a resolution of 1920 x 1080 pixels for optimal display results;
Java Development Kit and Java Runtime Environment (JRE). Processor (optional): The hardware acceleration of the Android emulator requires an Intel processor that supports the Intel VT-x, Intel EM64T, and Execute Disable (XD) Bit functionality technologies. Without such a processor, the Android apps can be run in the emulator, but the execution is much slower and more sluggish.

To refresh the repositories of Ubuntu and to update the installed packages, let’s first run the system update command:

There are two easy ways to install Android Studio on Ubuntu 22.04 LTS– one is using the SNAP package manager and another one is by downloading the Android studio package manually. Use the one which seems appropriate to you.

See– how to enable SNAP on Linux Mint

It is the easiest method to install this developing platform on Linux. And while writing this tutorial, the latest version of Android Studio is available via Snapcraft. There are further two ways to get packages from SNAP. One is using its command

the other is, if you don’t want to use the command-line interfacethen directly open Ubuntu Software Center and install Studio using the graphical user interface.

• Go to All Applications
• Search for Ubuntu Software
• Open it and click on the Search icon given on the left top side.
• Type Android studiowait for a few seconds, as it appears in the results, click it.
• Finally, hit the Install button and it will automatically get installed on your Linux OS.

If you don’t want to use SNAP then another way is to download manually its files and configure it to use on Ubuntu 22.04 Linux.

Android Studio requires JDK for proper working. While writing this tutorial, the latest version of Open JDK was available to install directly using the official repository of Ubuntu- OpenJDK.

Once the installation is done, check the version by typing: java -version

Now, for some reason you don’t want to use the SNAP package, then it is possible to get the Android Studio meant to install on the Linux system directly from its official website. Here is the link, visit the page and download the latest IDE package available for Linux. 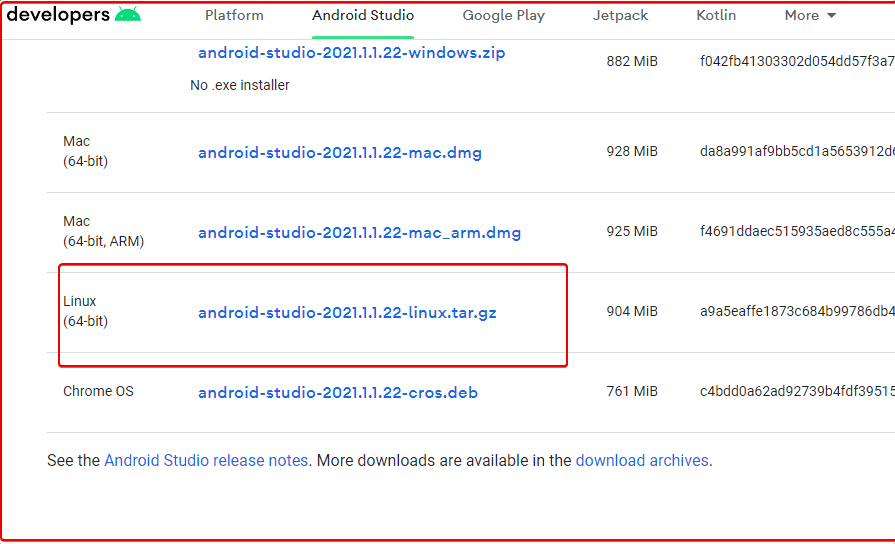 Once you have downloaded the file, it’s time to unpack it. Follow the given commands:

After extracting the package and moving it to the local folder, let’s run the script to configure this Android app development and emulator platform.

In case you already have some previous configuration or installation folder then you can select that otherwise let the default option be selected. 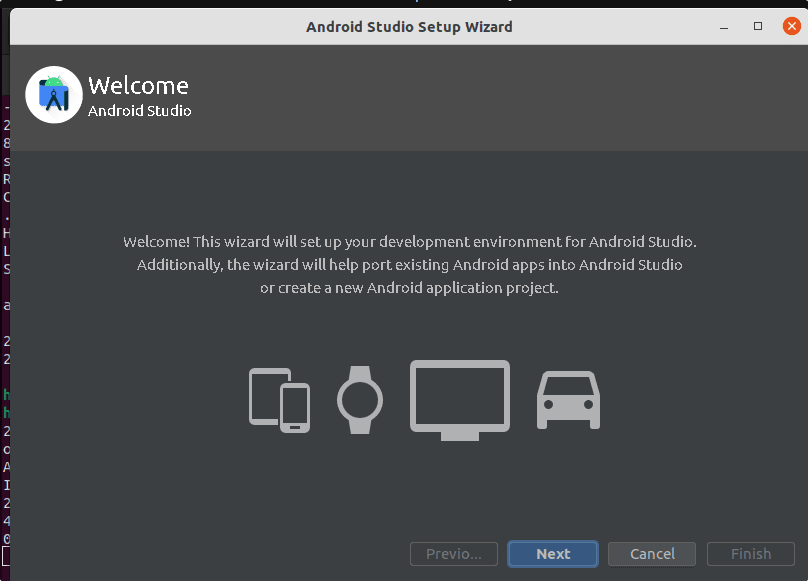 Select the way you want to set up the development environment for the Android studio on Ubuntu 22.04. For installing selective components go for Custom otherwise let the Standard option be selected. 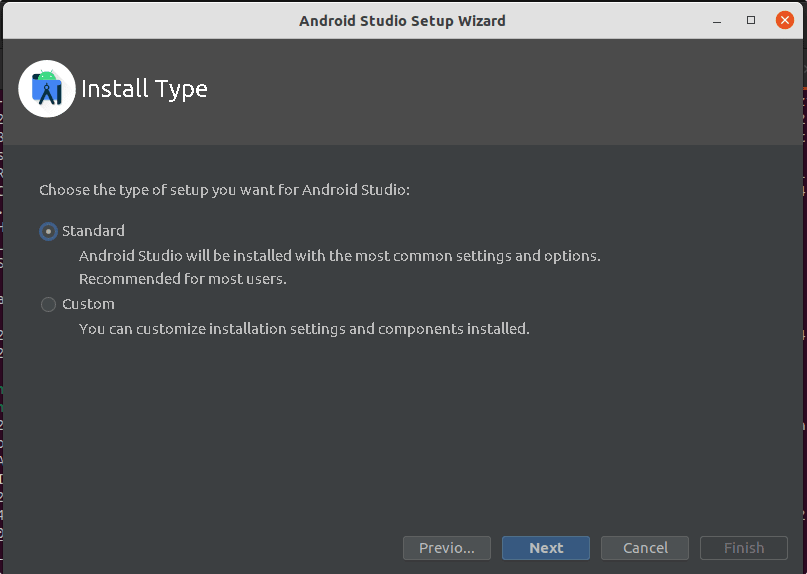 Although we can set it later as well, yet if you want then do it here to make the dark or light theme default. 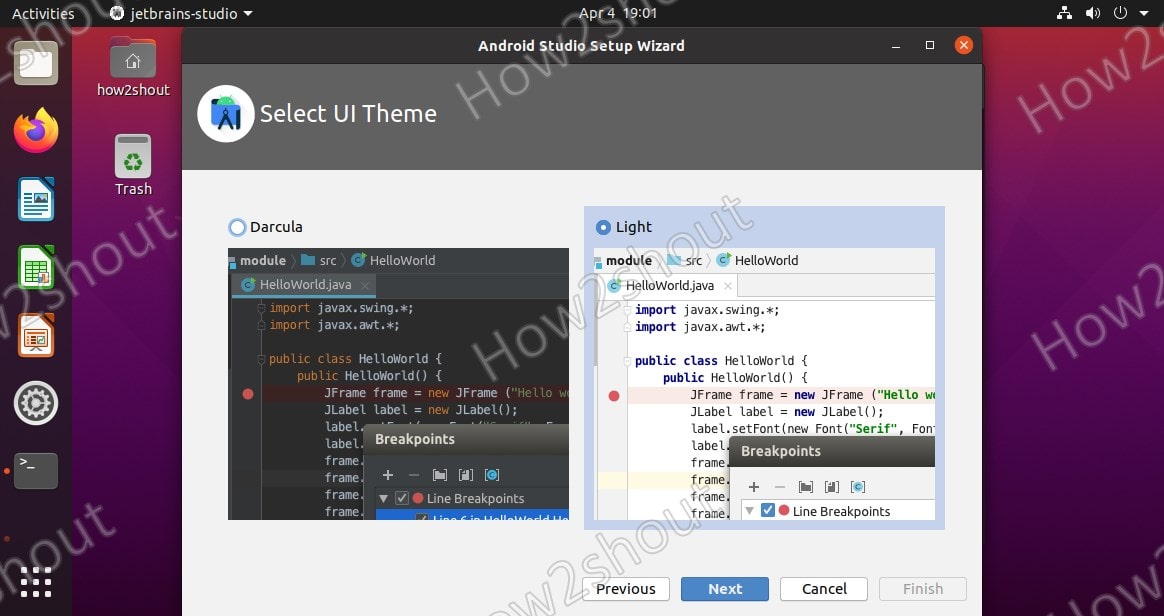 Once the installation is done. You will see the Android Studio, Create a new project and give some name to your project and you will be on the main screen of this app developing platform.

Click on the Tools and select Create Desktop Entry option to create a shortcut to easily access Android Studio from Application launcher or Desktop. 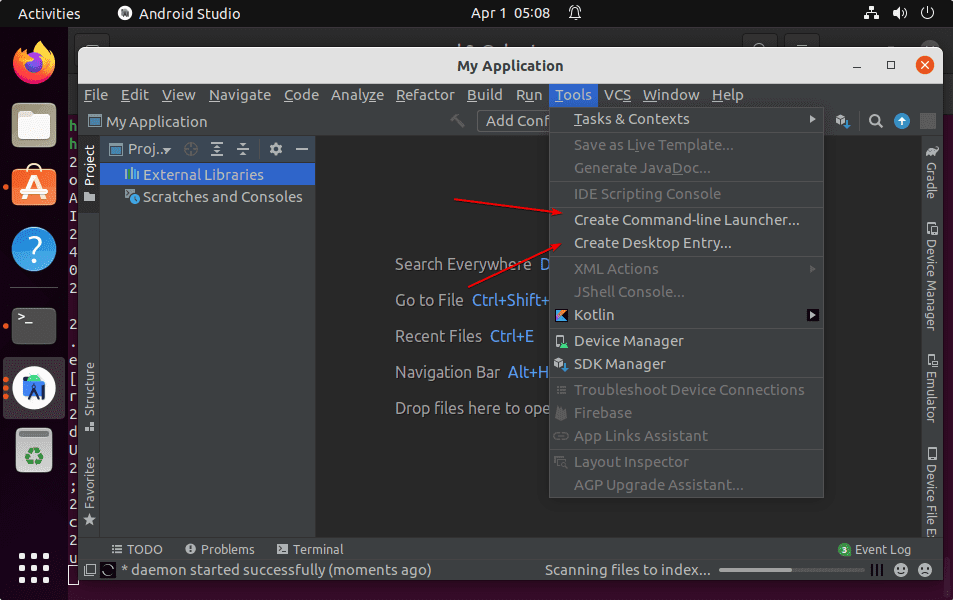 Whereas to run Studio from the command line, select Create Command-Line launcher. Once that is done, you will be able to start the platform by simply typing