There’s a sea change coming. The social media era of the internet is about to be replaced by blockchain-based interactions that make it easier to share, publish, consume, and make money from content online. We are moving from the internet’s second generation to a new architecture known as Web3.

Many of the next generation’s online giants are still percolating in a garage somewhere, and some haven’t even thought of yet. At the same time, a handful of existing companies are positioning themselves to become leaders in the Web3 epoch. On that note, you should consider picking up the three stocks below (all right, two stocks and a cryptocurrency). That way, your portfolio can take advantage of the upcoming Web3 revolution.

Most people know Unity Software ( U -2.17% ) for the massive shadow it casts over video game development. Developers used the Unity platform to create more than 60% of the games on the market last year, measured across subsectors from mobile gaming to the latest and greatest consoles. Game coders flock to this solution thanks to its ease of use, near-photorealistic graphics, and powerful scripting tools.

But that’s not all. You’ll also find Unity behind the scenes of other animated content such as movies, TV shows, and commercials. This is kind of like game development, with slightly different design goals in mind. Here, Unity is nipping at the heels of market leader Unreal Engine, created and maintained by Epic Games.

Going one step deeper into Unity’s deceptively huge business opportunity, the animation engine is finding its way into car design, autonomous vehicle platforms, architecture development, and manufacturing process controls. Universities around the world use Unity for advanced instruction in virtual, augmented, and mixed reality systems. Unity is poised to grab a generous slice of the metaverse market as it develops.

And that’s where the Web3 market comes in.

You see, Unity is more than a graphics engine with advances physics modeling. It also manages content streaming, payments, subscriptions, and many other pieces of the digital world-building puzzle. It also supports non-fungible tokens and blockchain-based functions. Moving to the Web3 world should be a cinch, and Unity’s management is already leaning into the opportunity.

“Lots of people are doing all sorts of things, striking gold in lots of different ways. And we make the underlying technology where most of these real-time 3D experiences are built,” Unity CEO John Riccitiello said in February’s fourth-quarter earnings call . “We are making the tools for creation, for operation. We will bring them around to support, firstly, every metaverse or Web3 application type you can imagine.”

I expect Unity to become a leading provider of development and publishing tools for the blockchain-based Web3 market.

An old-school music label may not be the first idea that springs to mind when exploring a brand-new and evolving market. However, Warner Music Group ( WMG ) is taking Web3 seriously and deserves a closer look.

The company dipped its first toe in the Web3 waters in 2019, when it invested a few million in blockchain-based app developer Dapper Labs. Warner Music has been expanding its blockchain exposure ever since, mostly by making small investments in Web3 upstarts. And that’s just the start of a long-term vision.

“We’re more convinced than ever that Web3 will be one of the next steps in the evolution of the music ecosystem, CEO Steve Cooper said on the first-quarter earnings call in February.” As the global entertainment economy continues to change at light speed, major music companies, they’re the only ones with the skill sets, the global footprint, and the financial resources to fully support artists and songwriters.”

So Warner Music is exploring many different avenues toward selling music and protecting copyrights in the emerging Web3 market. In the long run, this company wants to serve as a bridge between real-world productions and online music publishing. Warner wants to collect royalties wherever you hear a familiar tune — offline, online, or in entirely virtual worlds.

It would be borderline irresponsible not to mention Polkadot ( DOT 0.15% ) in this Web3 roundup. This ultra-flexible blockchain network and its namesake cryptocurrency are actually the brainchildren of the Web3 Foundation. The whole idea behind Polkadot’s cross-chain app development is to provide a secure environment for Web3 development, where many different blockchains and cryptocurrencies can work together. In this vision, the Polkadot ecosystem is greater than the sum of its parts.

I recently tripled my own Polkadot investment. Without this crucial ingredient, I don’t think we will ever see a fully functional Web3 market. On the way to that next-generation internet structure, the Polkadot token should gain value as more and more apps and projects depend on its functionality.

If the prospects of the Web3 phenomenon didn’t make you reach for the “buy” button yet, maybe this chart will: 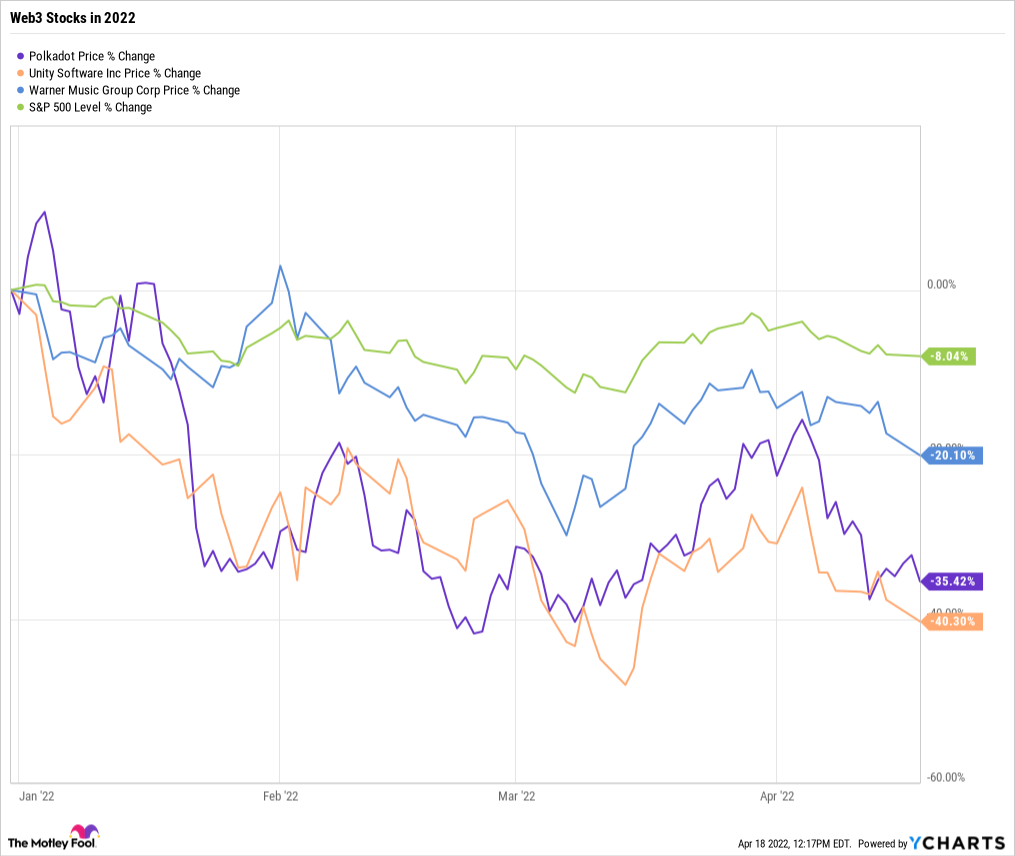 All three of these investments are hanging out in Wall Street’s bargain bin this year. The market as a whole is trending lower but these tickers are really suffering. They may still move even lower, but all of them look like great buys at their current bargain-bin prices.

This article represents the opinion of the writer, who may disagree with the “official” recommendation position of a Motley Fool premium advisory service. We’re motley! Questioning an investing thissis – even one of our own – helps us all think critically about investing and make decisions that help us become smarter, happier, and richer.