The product development division at Mahindra & Mahindra Limited (M&M) accelerates their product development life cycle while fostering collaboration between manufacturing, design and computer-aided engineering (CAE) teams with simulation apps. In 2018, we wrote about how the organization observed promising benefits by implementing apps into their development workflow and now we are checking in to see how their experience has been in recent years…

Product development is a time-sensitive process and automotive companies like Mahindra & Mahindra Limited (M&M), a multinational original equipment manufacturer (OEM) in the automotive industry in India, are constantly on the lookout for innovative approaches to shorten the product development life cycle and gain an advantage over their competitors. Simulation plays a crucial role in this endeavor by reducing the dependence on prototyping, which in turn reduces the time to market for any product.

However, even after incorporating simulation, product design can take up a lot of time. Designers require new concepts to be evaluated quickly, which may not be possible because of the required complexity of the analysis. After the design is evaluated by the CAE team, the design team then modifies the design based on the CAE results and again waits for validation by the CAE experts. These iterations continue until a final design is obtained.

As a result, the design lead time can run into a couple of months for some vehicle components, depending upon the number of iterations required for design finalisation. Moreover, the time-intensive CAE analysis between design iterations leaves the CAE experts juggling between intermediate design evaluations across several departments of an organisation. 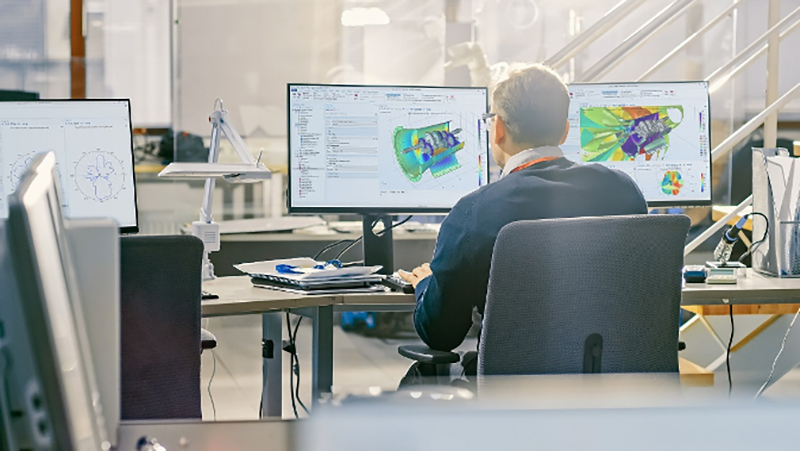 Simulation software like the COMSOL Multiphysics® software, with the built-in Application Builder tool, enable nonexperts to harness the power of simulation and help companies like M&M to reduce this bottleneck. The Methods Development team at M&M has developed close to 20 simulation applications, or apps, which are being used across teams working in different domains, including design; testing; and noise, vibration and harshness (NVH) analysis. The apps are to the organization using both COMSOL Server™ and COMSOL Compiler™.

These apps empower the design team with access to engineering analysis tools, allowing them to actively participate in the validation of new designs right from the concept phase, thus collaborating much more efficiently with CAE experts. This in turn minimises the iterations required to arrive at a robust design and frees up time for the CAE team to take on other projects.

The M&M team found that the use makes concept evaluation and finalization considerably more accessible. With apps, the designers can try out various designs themselves and objectively rank them based on set criteria. The parametric nature of apps offers convenience and flexibility for different design options to be evaluated quickly, leading to a shorter turnaround time than with a detailed 3D analysis.

Apps are especially beneficial when the design is in the concept stage since there is no dependence on CAD availability. Earlier, the process was constrained by delivery of the design layout by the CAD team; this further increased the design lead time. With the introduction of apps, the design evaluation can begin much faster. Apps are used as a starting point when the detailed CAD is not available. A number of ideas are evaluated and the CAD is prepared only for shortlisted designs.

For example, in the Chassis Concept Design app, faster evaluation of key metrics, such as the fundamental frequency of vibration as well as bending and torsional stiffness, is possible while performing NVH analysis. The app users do not have to manually add boundary conditions and mesh; the app is doing that for them automatically. This leads to a larger number of concept designs being evaluated for the same design cycle.

Another important aspect is visualization of the concept designs. In the earlier process, the designers were using time-consuming tools or they were dependent on other teams to observe the effects of their changes on the ensuing design, which in turn made it more difficult to propose intuitive modifications. The use of apps allows designers to visualize different designs as well as the effect of changing key parameters on the resultant design. This enables M&M teams to make more informed decisions about the feasibility of a design concept. This is highlighted in the Stabilizer Bar app, where a simplified modal analysis can be performed for quick evaluation of various design concepts.

Additionally, the user-friendly interface of simulation apps has made them very easy and convenient to adopt across M&M. The design process is easily accessible to various teams involved since the apps can be launched from the web browsers on their individual machines with the help of COMSOL Server™. Further, postprocessing and sharing results via the built-in reporting functionality make collaboration across teams much easier.

Apps are also converted into standalone executables with COMSOL Compiler™, which simplifies the accessibility of apps since the app user can run the simulation without a COMSOL Multiphysics® or COMSOL Server™ license.

The most prominent advantage observed by the M&M team after adopting apps in their design process is that the number of iterations before design finalisation has reduced drastically since the early designs emerging due to the use of apps are much closer to the desired outcome. Frontloading of design evaluation means more mature designs that already meet the minimum requirements are passed on to the CAE team for finalisation. Even crucial projects such as lightweighting and designing components for a target weight can be driven by the design team from the concept stage itself.

More concept designs generated due to the modified process, in turn, leads to faster design finalisation, which ultimately results in savings of both time and cost. The design team now has the tools to evaluate the proposed designs, allowing them to create innovative designs for upcoming and current projects. This has led to more innovation from various teams across M&M.

The use of compiled apps has enabled the team at M&M to truly democratize simulation across the organisation. With the successful adoption of simulation apps for the design of various components in passenger vehicles, the M&M team plans to build on this momentum in the coming years. They plan to incorporate more load cases and metrics in the existing apps for optimum evaluation of concept designs. Newer and more stringent design targets will be accounted for in the apps so that the resulting design is a step closer to the final expected design. The parameters inclusion of relevant optimization will further enhance the efficacy of these apps.