Chicago-based lettering artist Belinda Kou never imagined her lifelong passion for art would eventually turn into a career. Raised in the Detroit suburb of Novi, Michigan, by parents who immigrated from Taiwan, Kou felt an unspoken pressure to pursue a career that felt safe and secure.

“While I can’t speak on behalf of every Asian American community, I personally grew up in one where the engineers, doctors, and other people with STEM careers were among the most celebrated,” Kou describes. “This put internal pressure on me to take one of those career paths, especially since I didn’t know anyone else who looked like me in the arts.”

But while pursuing a degree in biopsychology at the height of the Great Recession, art remained a hobby for Kou. During a stint with Teach for America, she often redesigned the lesson plans and worksheets for her science classes. “I was always dabbling,” she says. “It was always on the side, slowly building into a main thing.”

As Kou’s Teach for America commitment reached its end, she decided it was time to follow her real passion and made the leap to graphic design. While working at a marketing agency as an associate art director, a chance encounter with iPad unlocked a new world of possibilities for Kou, and sent her down a path that would ultimately lead her to launch her own business.

“Drawing directly onscreen with Apple Pencil versus drawing on one device and having to look up at a different screen to see how it translates has really sped up my process,” she says.

Working with an increasing number of clients, Kou is enjoying pushing her color exploration with iPad and Apple Pencil — something that would take her hours with analog tools.

“Once I got my iPad and Apple Pencil, I created faster than I’d been able to with pencil and paper, which helped me to share consistently on social media,” Kou explains. “Between that and honing my voice and style, I started to attract clients. Today, so many of my clients hire me for digital art. I don’t think I could run my business without iPad.” 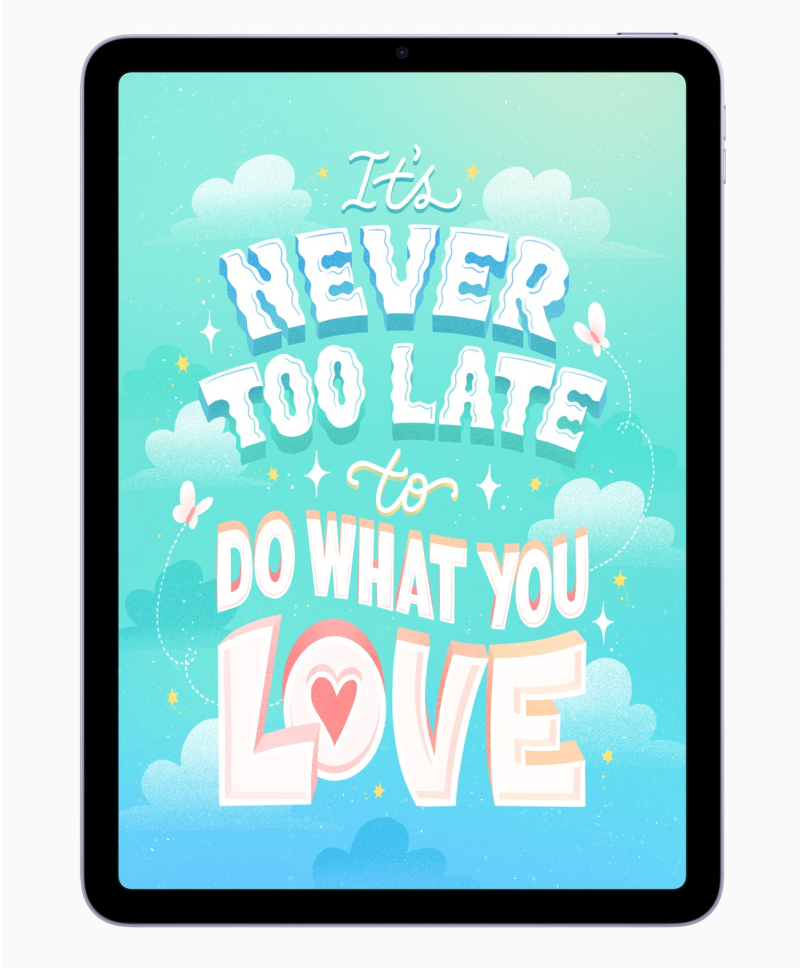 Beyond digital art, Kou is also being hired to create tutorials on how to use design programs — something her social media channels show she has serious chops for. Tapping back into her teacher mindset, she frequently shares her artwork, along with tips and tricks for using Procreate, the iPad-exclusive app she uses to create the majority of her illustrations.

Tools like Apple Pencil and the new iPad Air have made graphic design more accessible than ever, she says, reducing the barriers to entry she encountered early on in her career: “The people I teach know how to use iPad, and now they’re ready to level up in Procreate. But the fact is that they were able to go straight in there and draw something, without a steep learning curve.”

Over the years, she has cultivated an online community of like-minded, self-taught artists to share her work and creative processes with. She’s now working on building out a network of moms who are interested in pursuing a creative career for the first time.

“It’s been a struggle, especially in the pandemic, figuring out how to juggle everything, and we’re limited as to where we can take our kids or look for help,” explains Kou, who started her Instagram account as a creative outlet after the birth of her first child. “I always wished I had someone to encourage me and also show me how to do this, and I’m willing to be that person for other moms who are getting started today.”

Her message for anyone — from recent college graduates to new moms — contemplating changing fields and exploring the world of lettering? “It’s never too late to pivot,” she says, speaking from experience. “The fear is always going to be there; you just have to push through it to see what’s on the other side.”