Thailand’s architecture is often overlooked, with temples taking most of the limelight. The capital of Bangkok is a true concrete jungle where antiquity and modernity collide, creating a uniquely beautiful cityscape.

Unsurprisingly, Bangkok has produced some awesome and somewhat bizarre architectural designs. Searching them out is an interesting way to explore the city, and some towers will give you a bird’s eye view. So here are the Top 10 unique buildings in Bangkok 2022.

Baiyoke Tower
It’s not “unique” per se, but it was once the tallest building in Thailand, and it deserves a place on this list. It tops out at 88 floors above Bangkok’s famous Pratunam district and gives the most stunning views of the city. You’re welcome to stay here while on vacation, just keep in mind that it’s an older building, hence not as modern. But it offers great views, with a 360-degree rotating exterior viewing deck on the 84th floor, and a glass-enclosed skywalk on the 77th floor — both of which are equally spectacular. Maps, digital multimedia kiosks and coin-operated telescopes are ready to aid you in spotting various city landmarks.

Wat Samphar: the Dragon Temple
It’s a temple one hour from Bangkok, in Nakhon Pathom with 17 floors, featuring a Chinese dragon wrapped around the tower. The Buddhist temple, which was officially recognised in 1985, is built with Chinese-Thai style, while the temple grounds are designed with the typical Thai-Buddhist design. While dragons are important in both cultures’ mythology, the dragon at Wat Samphar is modeled from Chinese portrayals of the beast. There is a panoramic view of Nakhon Pathom once visitors reach the top of the tower, but remember to keep quiet as a sign of respect for the locals who visit the spot to meditate or pray.

G Tower
As the name suggests, the office building is shaped like the letter G. The lower floors are restaurants for office workers. The idea for the design originated from the name of the company behind it, G-Land or Grand Canal Land, which begins with the letter G. It also resembles the Thai ง letter from behind.

Pearl Bangkok
With its striking resemblance to the famous 30 St Mary Ax in London, known as The Gherkin, this skyscraper could fool Ari residents into believing they’re in London. However, the building’s owner, Pruksa Real Estate, denies any plagiarism, claiming that the building’s design is influenced by a pearl, mirroring the owner’s idea of ​​Thailand as the Pearl of ASEAN. The 25-storey edifice was designed by Palmer and Turner.

Bangkok University
Bangkok University has one of a kind building shaped like a diamond, located at the entrance and serves as a symbol of the university’s ambition. BU Diamond is a three building complex that houses a theme park inspired student lounge with facilities such as a library, a music rehearsal studio and a theater. A software development incubation center is also located in the building, which offers courses in cybersecurity, computer programming and video game production. 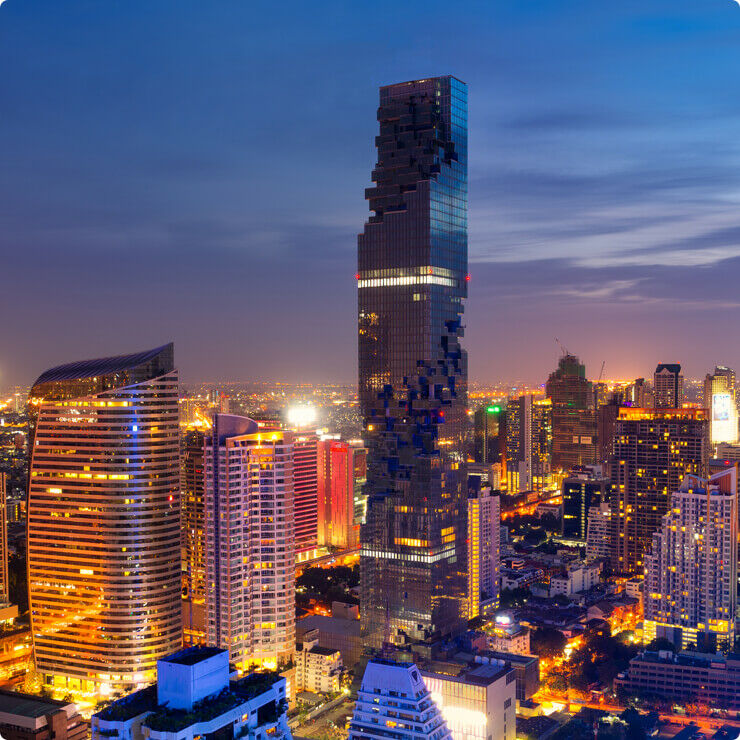 King Power MahaNakhon
The unusual yet unique pixelated appearance, the 314-meter-tall King Power Mahanakhon remains clearly one of Bangkok’s most unmistakable skyscrapers, however, Magnolias Waterfront Residences are located by Icon Siam is only four meters taller. There is an observation deck on the 78th floor. It’s a must be on your Bangkok bucket list, with 360-degree panoramic views from both an indoor and outdoor viewing area.

Sathorn Unique Tower, aka Ghost Tower
Many projects were canceled, paused or even abandoned when Thailand went through the Asian Financial Crisis in 1997. Yes, we know that it’s not completed and has been abandoned for a number of years, but it has gained a lot of popularity. It’s a hotspot for explorers who will walk up to the very top to get a skyline view of Bangkok. Please, don’t visit the building as it’s considered trespassing, and since it’s been left untouched for a while, it’s unsafe.

Robot Building
This building is shaped like a sleeping robot and is the headquarters of United Overseas Bank, or UOB. It adds a playful and quirky feel to Silom’s hectic area. The Robot Building was once the home of the Bank of Asia. The building is created by narrowing the 20-story skyscraper on some floors. The upper stories’ round windows resemble eyes, while the building’s sides are decorated with robot-like features. An antenna on top of the building serves as a telecommunication and lighting device.

Lebua Tower
Since its appearance in the film The Hangover II, where a scene was shot in the tower’s restaurant and sky bar, Lebua State Tower has grown in popularity. Some people have labeled it ‘The Hangover building’ or ‘the building from The Hangover‘. Its golden dome can be seen from miles away and is instantly identifiable.

Elephant Tower
Various spots in Chatuchak offer great views of the iconic tower. It pays tribute to Thailand’s beloved animal. The elephant’s trunk and legs are made up of three towers that span seven levels of residential units. Ears and tusks are also part of the design. Back in 2017, Architectural Digestone of the most prestigious magazines covering global architecture, put Bangkok’s famous Elephant Building on its list of the world’s 24 ugliest skyscrapers.