The Angular Material Tree, the MatTree, is the ideal control for displaying hierarchical data. Not only can it represent a variable number of levels, but each item in the tree can possess a different number of children and levels. In the 2nd installment of the Create a Nested Multi-select Tree with in Angular series, we utilized the MatTree to create an alternative to the HTML SELECT control that is better suited for working with hierarchical data. As part of that web development tutorial, we learned how to retrieve selected nodes using the NestedTreeControl’s getDescendants() method. As we will see in today’s article, that same method can help us filter nodes based on a number of conditions in order to limit visible nodes to those which are:

To achieve both the above ends, we will refactor the Nested Multi-select Tree Demo from the aforementioned article by adding a Show Selected Items toggle control as well as a Filter textbox.

Node filtering is best achieved using a combination of TypeScript code and template conditions rather than mutating the underlying data structure. To do that, we can use the CSS display property to either show or hide a given node. But, before we get to that, let’s add the toggle control in the template:

Thanks to two-way binding, the toggle control’s state is immediately reflected in the showSelectedOnly variable’s value:

We can then set each node’s display property using Angular property binding.

Initializing the showOnlySelected variable to false puts the toggle slider to the off position and shows all nodes by default:

Sliding the toggle to the on position now hides all unselected (ie unchecked) nodes: 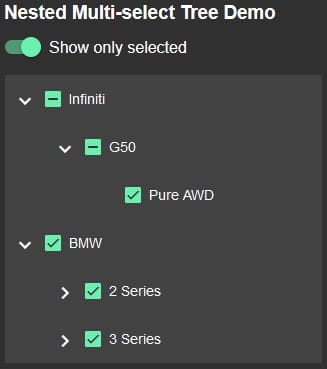 Filtering Nodes By Search Criteria with TypeScript and CSS

You have to admit that the first part of this tutorial was pretty easy. This section is a little more substantial. The same approach of combining TypeScript code with template conditions will continue to serve us well. This time, however, some TypeScript logic will be necessary in order to determine whether a node should be hidden or visible.

With that in mind, let’s begin by adding the filter control to the template:

This time around, we will call the hideLeafNode() and hideParentNode() methods to determine whether to show or hide the node based on the searchString.

I’ve often said that variables are far preferable to method calls in template expressions because the latter will be invoked numerous times whenever the user interacts with a node element. However, there are times when a method may be the best choice. In this case, the deciding factor is that hideLeafNode() and hideParentNode() will receive the node as an argument, allowing them to check its value against the searchString. In any event, there are ways to minimize the number of method calls, as we will see a little later on.

There are many ways to check if a string contains a given substring; one way to perform a case insensitive test is to use a Regular Expression or RegEx. We are using the constructor so that we can use the searchString as the pattern:

Notice that we still have to take into account that the node may already be hidden by the Show-only selected filter. In that case, the method should return true without even looking for the searchString.

Since RegEx patterns can contain a myriad of special characters, it would probably be wise to restrict the allowable characters on the text input to those of node values ​​– say letters, numbers, and spaces – were this a production application.

Hiding a parent node depends on whether or not all of its child nodes contain the searchString (ie, are hidden). To do that, we will collect all of the node’s leaf children and run them through the hideLeafNode() method:

Here’s a screen capture of the search filter in action: 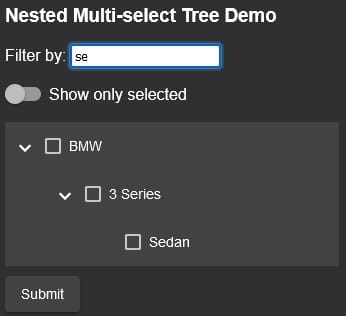 As mentioned earlier, relying on methods to resolve template conditions can be a real resource hog. For that reason, you should always aim to keep the number of method invocations to a bare minimum by combining comparison operators in such a way that the method is the last operand in the chain. In the case of the hideLeafNode() and hideParentNode() methods, they only need to be invoked when the filter text input – or the searchString – contains a value. With a little help from JavaScript falsinesswe can just add the searchString to the template conditions:

There’s a demo of today’s code on stackblitz.

Indeed, there are many ways for web developers to filter nodes of a MatTree. The two filtering types that we explored here today are but a couple of the most common. We also ignored any additional actions that may accompany a filtering operation. In the next article, we will be taking a look at two of these. Both related to search string filtering, we will expand nodes that contain the search string as well as highlighting the matched substring in the node labels.