By Mail on Sunday Reporter

Stroke survivors will play video games to help speed up their recovery as part of an NHS trial.

In the £800,000 scheme, a group of stroke victims in Bristol and London will use virtual-reality headsets which give the impression they are inside the video game.

They will then undertake a series of fun activities that mirror the physiotherapy sessions they would experience in hospital.

For example, they will take part in a virtual boxing match that includes arm exercises.

The six-month scheme is designed to allow people to carry out their physio at home, while making crucial exercise routines more engaging.

In the £800,000 scheme, a group of stroke victims in Bristol and London will use virtual-reality headsets which give the impression they are inside the video game

People who spent more time outdoors during the pandemic in 2020 were less depressed and anxious than those who stayed mostly indoors, researchers found.

And according to the study, having a park within walking distance during the first Covid wave boosted mental health.

More than 1,200 people were asked how often they visited green spaces in 2020.

Those who spent a lot of time indoors and on the internet reported poor mental health levels, while those who spent time in a green space nearby saw significantly lower levels of depression and anxiety. 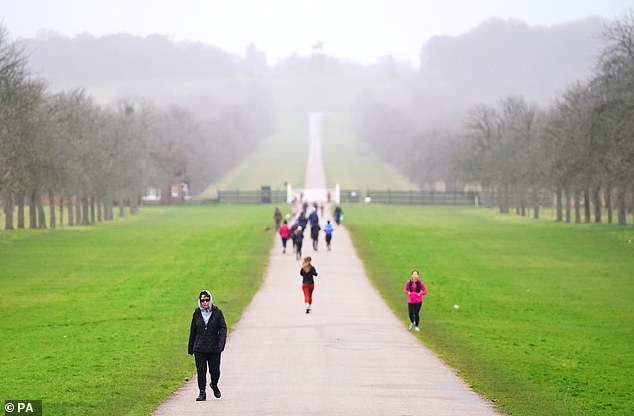 People who took exercise in the park during the Covid-19 lockdown were less depressed and anxious than those who stayed mostly indoors, new research has found

The University of Colorado Boulder study found that a third of people said they spent more time outdoors during the pandemic than before it. ‘This research shows how critical it is to keep parks and green spaces open in times of crisis,’ said study author Professor Colleen Reid.

The London borough of Lambeth recorded more chlamydia diagnoses than any other local authority last year. There were more than 1,100 cases of the sexually transmitted disease for every 100,000 residents.

As a result, the South London borough spends most of its sexual health budget on sexual disease testing.

The research, compiled by men’s health firm From Mars, also found that nationally more than £300 million was spent on tests and treatment for sexually transmitted infections in the past year.

Nearly half of Britons mistakenly believe that people who develop an eating disorder want to change their appearance. And 16 per cent think the condition is by choice, according to research by the eating disorder awareness group Hearts, Minds And Genes Coalition.

Mental health conditions such as anorexia and bulimia are thought to be caused by a mix of genetics, traumatic events and personality traits.

‘No one chooses to have an eating disorder,’ says Dr Agnes Ayton, who chairs the Eating Disorders Faculty at the Royal College of Psychiatrists.