iRobot has launched a new educational robot. The Create 3 is based on the Roomba i3 vacuum cleaner. It won’t clean floors for you, but instead is a development platform for learning ROS 2.

This week was National Robotics Week, making it a suitable time for iRobot to launch the third generation of its Roomba-based robot intended for STEM education. Stripped of brushes and other floor cleaning paraphernalia, the Create 3 still has plenty of smart technology. This now goes well beyond the ability to move and to detect edges.

Originally introduced in 2007 Create’s role is to teach the fundamentals of robotics, computer science and engineering by letting users, in particular “advanced hobbyists” program behaviors, sounds and movements and attach sensors, electronics, cameras, grippers and more to the device. The Create Platform also lets users build something on top of it and iRobot provides tutorials and sample projects.

It is over seven years since we reported the launch of the previous model, see Create 2 Roomba That Doesn’t Suck, and in the interim iRobot acquired Root, an educational robot originally developed by the Wyss Institute at Harvard and then, after a successful Kickstarter, launched as a commercial product. Root and its programming environment was, and is, intended as an educational tool that would engage youngsters from age 4 upwards with coding. It covers the basics of computational thinking for kids and takes them from block-level coding through to Python.

The Create platform targets a higher age range – high school and college students as well as postdocs. The idea is to begin by programming simple behaviors, sounds and movements, then advance to autonomous localization, navigation, and telepresence applications with plenty of scope for creativity. You can program it in ROS 2, with the Python SDK, or even with the iRobot coding app.

In terms of hardware Create 3 is equipped with an inertial measurement unit (IMU), optical floor tracking sensor, wheel encoders, and infrared sensors supporting localization and navigation. Additionally, the robot has a downward-facing sensor to do optical flow and includes cliff, bump and slip detection, along with LED lights and a speaker.

Create 3 is compatible with ROS 2, the open source industry-standard robotics software from OpenRobotics. ROS 2 is what enables actuators, sensors and control systems to communicate with each other. It also has Ethernet, USB and Wi-Fi, again opening up the type of smart applications that can be created with it. 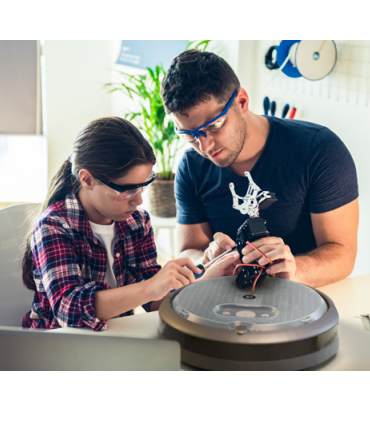 The iRobot 110 – Just Don’t Do This With Your Roomba