Lee Jung-min
The author is a senior editorial writer of the JoongAng Ilbo.

America’s 16th President, Abraham Lincoln, recalled later his feelings upon the winning presidency in 1860. He excited about the triumph but overwhelmed by the heavy task of leading a sharply divided country. According to “Team of Rivals: The Political Genius of Abraham Lincoln,” a 2005 book describing Lincoln’s forming of an outstanding cabinet from 1861 to 1865, Lincoln worked on the formation of his cabinet from the night of his victory until sunset of the following day . He chose seven members of his cabinet during that time. Despite strong opposition from his party, the seven eventually filled key posts, including secretary of state and secretary of the treasury, wrote the author of the book, Pulitzer Prize-winning American historian Doris Kearns Goodwin.

Three people who competed with Lincoln for the Republic nomination — William Seward, Salmon Chase and Edward Bates — were offered the most important positions of the Secretary of State, Secretary of Treasury, and Attorney General, respectively. Lincoln also tapped rival Democratic Party members such as Montgomery Blair for Postmaster General, Gideon Welles for Secretary of Navy, and Edwin Stanton for secretary of War. Instead of relying on loyalists and contributors to his campaign, Lincoln brought on opinionated and experienced men who had previously opposed him and even ridiculed him.

The presidential election in 1860 was held in a dark period of hatred and fear. The United States of America was deeply divided over slavery. The ruling Democratic Party had two candidates, one each from the South and North, running for the presidency. When Lincoln won the Republic convention, Southern radicals set a dummy of Lincoln on fire. The country was teetering on the brink of a civil war.

Lincoln, however, did not resort to the politics of division. Farsightedness and courage made him an extraordinary leader during such a time of crisis. Lincoln opposed slavery, but did not use it for political goals. He feared that prioritizing the freeing of slaves could break the country into two, which could upset his goal of ending slavery. He had to defend the nation so as not to invite invasion from foreign powers. To defend the nation, he had to unite the people. Engaging political opponents and rivals was a means to achieve that goal.

“A house divided against itself cannot stand. I believe this government cannot endure, permanently half slave and half free. I do not expect the Union to be dissolved — I do not expect the house to fall — but I do expect it will cease to be divided. It will become all one thing or all the other,” declared Lincoln in 1858 in the statehouse for the Republican State Convention in Springfield, Illinois.

If not for Lincoln’s strong conviction and desperate appeal to unite the Union, the United States could have been bisected like the Korean Peninsula. At the very least, it may not have become a superpower. Appointing the most competent men to major posts in his government regardless of differences and past rivalries led him to victory in war and the goal of ending slavery. 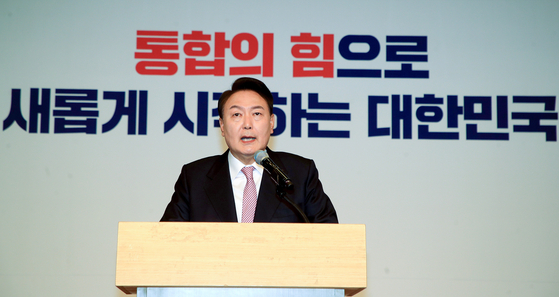 In a speech Thursday morning at the National Assembly after his election victor, President-elect Yoon Suk-yeol underscored the importance of unifying a divided nation. [YONHAP]

A warlike election has come to an end in Korea. This presidential election was fraught with hatred and spite. Crude epithets such as monster, cheater and criminal added to the disgrace. The filthiness of the fight is mostly due to the Moon Jae-in administration and ruling Democratic Party (DP), with their greedy tribalism stoking ideological divisions. Their crusade against so-called past ills or evils evolved into a pure power-play to eliminate opponents, while any skeletons in their closets were denied or covered up. This politics of hypocrisy and spite produced a backlash from the public, which decided to change the ruling power.

President-elect Yoon Suk-yeol from the opposition People Power Party (PPP) will face various challenges. Whatever the cost, he must set his direction in advancing the democracy and making lives better for future generations. Nothing must come ahead of these clear missions. The politics of ideology must end together with the reproduction of divisions. Instead of celebrating his election victory, Lincoln stayed up all night brooding on ways to heal national divisions. The same challenge is laid in front of our president-elect.

Past cabinet appointments all offer the same lesson. Hiring people because of their campaign contributions, loyalty, where they went to school and religious background have all backfired on past presidents. Handing out important jobs as rewards or division of the spoils lead to failed presidencies.

The direct voting system adopted in 1987 has produced eight presidents. The repetition of tragic flaws must stop. Like Lincoln, who formed an inclusive team of rivals and opponents instead of anti-slavery advocates, Yoon must pay heed to the voices of people who didn’t work on his campaign, people who didn’t even vote for him, and keep sycophants at bay. It is the only way to make a graceful exit five years later to retirement — and not to a jail cell.