Dart Knocks Over Tower of Crates 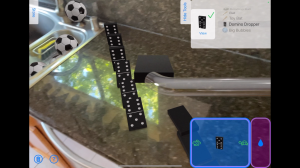 Line Them Up, Knock One Down, and Watch

The app lets users build physically realistic 3D scenes into their space with tacks, planks and other virtual objects. The LiDAR 3D depth sensors in iPhone and iPad Pros see the shape of the user’s space, so virtual objects seamlessly collide, slide, bounce, roll across surfaces, and disappear behind real ones.

Until now most AR apps have relied mainly on canned animation rather than physical simulation.

Reality Construction Kit users tack and toss items into a mixed reality scene embedded in their own unique furniture and the space around them. As shown in video, the physical realism is uncanny.

Along with realistic collisions and seamless motion across real and synthetic objects, stunning realism is achieved by:
• lighting, shadows and reflections of the real room in shiny virtual objects
• highly directional, diverse sounds from up to 4 speakers

Until its launch event next week, buyers, reviewers, early adopters and award voters can get Reality Construction Kit and its eight initial paid In-App Purchases for free at the App Store.
• Track — for building courses and structures into your space
• Darts — stick into real and virtual objects, walls, ceilings or real dart boards
• Balls — basketballs, footballs, volleyballs, and bowling balls
• Dominos — line them up and knock them down
• Baseball Bat — reach in and nudge or swing at virtual objects
• Basketball Hoop — toss an object in and hear it score
• Crate — open at one end: stack ’em, tack ’em, fill ’em, spill ’em …
• Plank — tack these into your space to perfect a Track course

PANTOMIME CORPORATION
Pantomime Corporation was founded in 2014 by CEO David Levitt, an alumnus of the team at VPL Research that invented virtual reality, and Don Hopkins, of the team that created The Sims. Pantomime won the Launch Silicon Valley Startup Challenge and launched several of the earliest augmented reality apps. Dr. Levitt is a frequent speaker at Augmented World Expo, AR/VR Vision Summit, Digital Hollywood and GamesBeat Summit. He was awarded a 2019 Virtual World Society Nextant Prize.


EIN Presswire’s priority is source transparency. We do not allow opaque clients, and our editors try to be careful about weeding out false and misleading content. As a user, if you see something we have missed, please do bring it to our attention. Your help is welcome. EIN Presswire, Everyone’s Internet News Presswire™, tries to define some of the boundaries that are reasonable in today’s world. Please see our Editorial Guidelines for more information.