Something for the Weekend I nearly choked when I read the email. “Your eBay auction has ended. Your NFT has sold for $1 million.” That’s about $0.999999 million more than I thought it was worth, hence the surprise. Oh, and becoming comfortably well off was a bit of a jolt, I suppose.

You might be wondering what the NFT was. Why? Does it matter? It’s just an NFT. It doesn’t exist.

My sudden change in financial circumstances mean some changes will take place in my life. I might finally be able to fund one or two little startup app ideas I had, or enjoy some luxuries previously denied to me, such as buying a really big TV, traveling in First Class, or not having to check my email while I take a day off.

I’m now technically a millionaire in the US but back home I’m not even close to that. If I was to treat my NFT sale as an investment in my skills, I’d still need a great deal more cash to classify myself as a Unicorn; nowhere near being a Decacorn or Hectocorn. Some new monikers are needed for the likes of me. I was thinking of calling myself a “Popcorn” or a “Flakecorn” or even a “Takethemoneyandruncorn.”

Perhaps I will settle with “Sweetcorn.” Ho ho ho.

Choosing the right title is important to people wanting to be important so I’d better choose well. “Tsar” and “oligarch” are definitely out of fashion at the moment. So is a junk-food punnet of chips and gravy with cheese – otherwise known as the French-Canadian indelicacy with the (currently unfortunate) name “Poutine.” 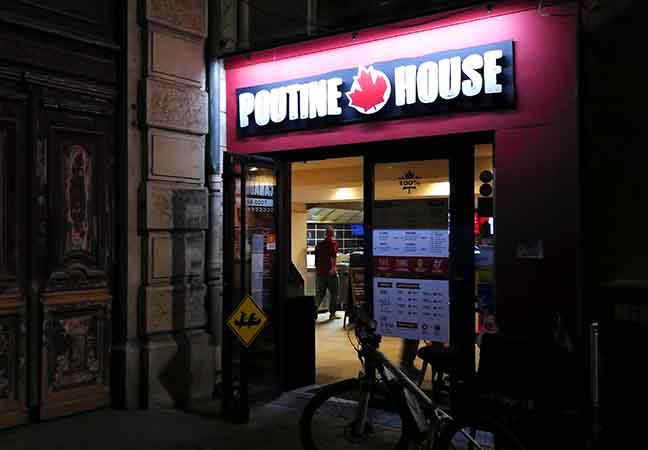 Poutine: Chips! Gravy! Cheese! In a variety of combinations!

Previously popular with late-night drinkers tumbling out of bars, Poutine House is now virtually empty, apart from delivery dudes on bikes. Hungry boozers might still order over the internet but they no longer go there in person. The name is a put-off: they might as well have called it WarMongerBurger or MacNovichok’s.

Talking of app ideas and the importance of choosing the right name, I am reminded of an app project I worked on which I was required to report to an unfortunate who’d been inflicted with what was obviously a joke job title: “Digital Evolution And Direction of High End App Development Manager.” I mean, the initials literally spelled out “DEADHEAD” but the poor sod seemed to have no idea.

Nobody else seemed to be laughing at it, though, so I stopped as well. It was not exactly a jovial working environment.

I should have guessed this would be the case on my first day. I’d been hired to produce a cheap demo magazine-style app for a company to show them what could be chucked together at low cost. After the initial handshakes and smiles, the employer told me to go downstairs and get what I need from his Director of App Development.

What, they already have a department for this? What am I doing here, then?

I trudged downstairs and discovered a vast, open-plan floor filled with scores of web (not app) developers. The Director himself sat at a huge desk at one end of the room, not enclosed in an office but surrounded by a total exclusion zone of five carpet tiles’ depth. Nobody veered into that zone, I noticed: if a minion had to walk across the space, they’d sort of swerve around the gap to avoid stepping into it. I assumed it had been mined.

Standing tip-toe on the edge of the no-man’s land, I raised my eyebrows and began to say hello with the intention of introducing myself. I managed to squeak out “Hell…” when his secretary jumped up from behind their equally huge desk to my left and almost sprinted over to physically bar my way.

If anybody has ever tried to bar your way in an open-plan office, you will know that it doesn’t really work. I just stepped to one side, not knowing who this idiot was, but they danced about in front of me like a child to stop me even looking at the director and said I would have to make an appointment.

“No worries, let’s do that,” I replied, the two of us sashaying like a mirror mime, face-to-face, back over to their desk. “How about… now?” No, he’s busy. He didn’t look busy but still, whatever. “When, then?” On Thursday.

I made my appointment and went back upstairs to twiddle my thumbs for the next three days on my generous day rate. On Thursday, I got to meet the great Director. Somewhat older than his team, he must have been pushing 29. The meeting lasted less than half a minute. He walked into the meeting room and said two things:

“I don’t have time for you and I’m really busy.”

“Deal with my secretary from now on.”

Then he stood up and left. Good job I booked that meeting, I thought.

That afternoon, I was cc’d on a terse departmental memo from the Director to announce that his secretary had been promoted to the aforementioned “Digital Evolution etc. Manager” role. I later learned that the only thing this person would be managing was me; nothing and nobody else.

Perhaps the idea was to put me in my place. I thought it was brilliant: I’d been regarded as such a dangerous loose cannon that I needed the 100 percent attention of a dedicated babysitter.

Another thing I learned very quickly was that DEADHEAD did not know anything about app development, despite those very two words being in their job title. In fact, they were challenged by the whole digital computer thing.

Here’s the kind of arsing about that went on. I’d put in a request for certificate authority files so I could validate a dev app to get started; they would send me some Excel document or other, under the possible assumption that since Excel files were sort of computery they might make me go away. I’d then supply step-by-step instructions on how to generate the certificates; In response, they would cc me on an email to the board of directors complaining that I was being difficult.

Next thing, DEADHEAD would be pestering me to give them a copy of my dev app content so they could evaluate it. I’d reply to say sure, send me your device UIDs. They would reply back to say they were too busy (ie don’t know how) to do this. So I’d carry on doing my thing for a few days and then receive a new email from DEADHEAD, cc’d again to the board of directors, demanding to know why I failed to send them a copy of my dev app as requested.

Naturally, I responded to everyone to explain exactly why.

Eventually the two of us were hauled in front of the Director who suddenly had time and was no longer busy. “Stop acting like children and get on with it!” he ordered.

This was the most sensible thing anyone had said to me since I entered the building for the first time a month earlier. “What would an adult do?” I pondered… then it came to me: misbehave creatively.

DEADHEAD and I left the meeting room, each with a determined mission: theirs to beat their Candy Crush high score, mine to subvert the chain of command with a simple act of harmless rebellion.

I wandered to the other end of the open plan office and crept up behind one of the web developers who I knew was one of a dozen working on a never-ending app dev project that so far had cost the company more than a Sweetcorn.

“No problem,” he said without even looking up, and 90 seconds later I was striding away brandishing a USB stick. By the end of the week, the project was complete, my invoice was signed off and I made my escape from the madhouse.

Never again would I guffaw at a malicious job title: such things, I had learned, were invented to suit malicious people and should act as a warning to others.

Hang on, what was DEADHEAD’s real name again? I think I’ve seen it quite recently. Yup, I should have guessed… nobody else would have been daft enough to pay $1m for the NFT that I was selling under a pseudonym.

On the other hand, that rather suggests they have more money to splash than I ever did. Being dim and over-promoted with stupid job titles is definitely the foundation of a successful and profitable career. But just wait until they see the NFT: this week’s column saved in an Excel file.

Enough to make them choke, I guess.

Alistair Dabbs is a freelance technology tart, juggling tech journalism, training and digital publishing. Before you shower him with messages of congratulation and requests for loans, he asks you politely to take note of the date at the top of the page. More at Autosave is for Wimps and @alidabbs.