Virtual reality video games really can be brought to life with scents designed to match the action, a new study shows.

In experiments, volunteers played virtual reality (VR) game Resident Evil 7 Biohazard, both with and without smells that complemented parts of the game.

Scenes in the survival horror game feature intense smelling objects such as rotten food, smoke and a rotting head.

Researchers found that the addition of the smells significantly increased people’s sense of being present in the game environment. 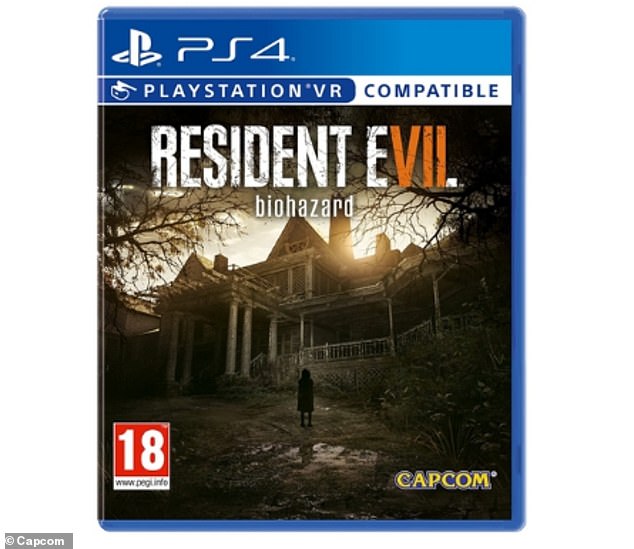 In Resident Evil 7 Biohazard, the player controls Ethan Winters from a first-person perspective as he searches a derelict estate for his missing wife

Resident Evil 7 Biohazard is a virtual reality (VR) game developed by Capcom and released in 2017 for Microsoft Windows, PlayStation 4, Xbox One and more.

The survival horror game, which supports the PlayStation VR headset, is the first main Resident Evil game to use a first-person view.

The player controls Ethan Winters from a first-person perspective as he searches for his missing wife in an estate occupied by an infected family.

The new study was conducted by researchers at Australia’s government agency CSIRO and the University of Technology Sydney.

‘Virtual reality (VR) headsets provide immersive audio-visual experiences for users, but usually neglect to provide olfactory cues that can provide additional information about our environment in the real world,’ they say in their paper.

For the study, the researchers recruited 22 subjects who explored the same VR environment of Resident Evil 7.

As they played, the game was augmented with smells generated by an olfactometer, which delivered odour volatiles via a soft plastic tube fixed underneath a participant’s nose. 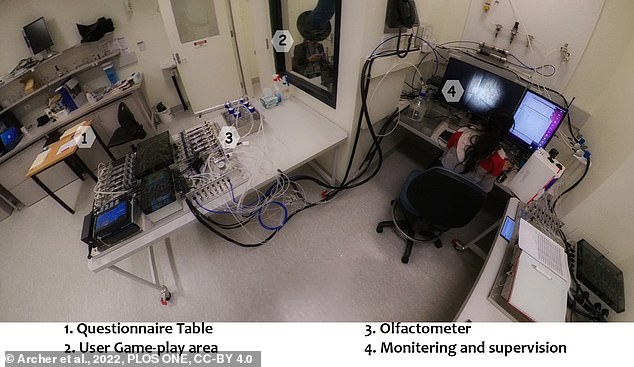 Smels have been touted as the next frontier for an immersive virtual reality (VR) experience.

OVR Technology, a start-up based in Burlington, Vermont, is working on scent technology for VR.

The firm says: ‘Every single time we breathe, we inhale billions of tiny scent particles that contain important information.

‘The power of scent lies in its direct link to our limbic system, the area of ​​our brains responsible for memory and emotion, and the part that influences our unconscious behaviors and motivations.’

One volatile was cis-3-hexen-1-ol, an oily liquid that smells like freshly cut grass, to bolster the sense of being in a forest.

Participants walked through the same VR environment twice, with or without the introduction of odour stimuli.

Directly after each gameplay, participants completed a questionnaire to determine their ‘sense of presence’ (sense of being in a particular place or time period) from the overall gameplay, as well as their sense of immersion in each of the scenes.

Additionally, physiological measurements – heart rate, body temperature and skin electrodermal activity – were collected from half the participants for each gameplay. ‘Electrodermal activity’ refers to changes in the resistance of the skin to a small electrical current based on sweat gland activity.

The results showed the addition of significantly increased participants’ sense of spatial presence in the VR environment compared to VR with no odour.

Participants also rated the realism of VR experience with odour higher compared to no odour; However, odour did not result in change in emotional state of participants (arousal, pleasure and dominance). 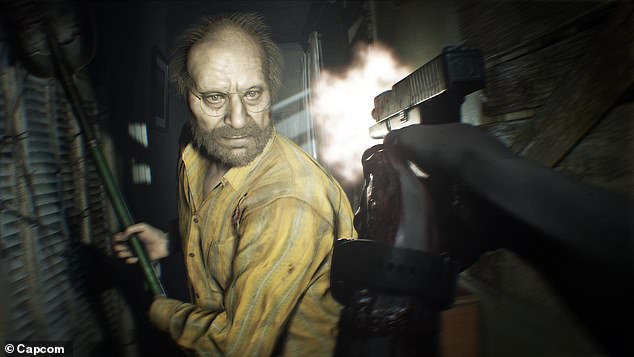 The survival horror game, which supports the PlayStation VR headset, is the first main Resident Evil game to use a first-person view

Further, the participants’ physiological responses were impacted by the addition of odour.

The team say odours offer an opportunity to ‘create a more immersive experience to increase a person’s presence within a VR environment’.

‘In addition to gaming, the results have broader applications for virtual training environments and virtual reality exposure therapy,’ they write.

The study has been published in the journal PLOS One.

HAUNTED HOUSES ARE EVEN SCARIER WITH FRIENDS, STUDY SUGGESTS

Haunted houses are scarier when you’re visiting them with other people, a 2022 study shows.

Researchers found that adult visitors to haunted houses are more likely to experience fear responses including dilated pupils, sweating and rapid heartbeats when attending in a group.

It’s thought that among a group, fear may spread like wildfire to a threat, like a herd of wildebeests being preyed upon by a lion in the wild.

The visitors were tested to their limits at 17th Door Haunted House, an extreme attraction that tests ‘fight-or-flight’ responses in Fullerton, California.

As the name suggests, the house consists of 17 rooms with various threats that form an uninterrupted experience, linked to a theme about a dangerous prisoner in a fictitious prison.

During the 30-minute experience, visitors encounter situations that mimic the threat of suffocation, the inability to escape an oncoming speeding car and being shot by a volley pellets from a firing squad while blindfolded.

One YouTuber describes it as an ‘extremely graphic and painful haunted house’, while a Yelp reveiwer said: ‘It gets very scary at the end, and they literally convinced my fiancé that she was going to die.’