Virtual reality (VR) therapy can help people with psychosis who are scared of their home, a new study leaving shows.

UK researchers have developed a VR experience called gameChange that takes patients on virtual visits in everyday settings, guided by a virtual coach.

It allows them to virtually take part in day-to-day scenarios such as buying a coffee, waiting at a bus stop or visiting a doctor.

gameChange targets the intense anxiety that keeps many people with psychosis from participating in everyday activities in the real world.

In trials, the technology has proven beneficial even for patients who have experienced the most challenging psychological problems due to psychosis.

It could soon be offered as a form of therapy on the NHS, replacing the need for a real-life therapist.

‘Pick a scenario’: This image shows the several virtual visits that psychosis patients can make in the gameChange virtual world 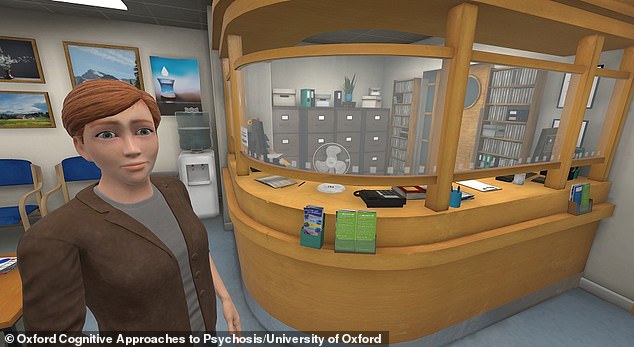 It takes patients on virtual visits outside the home, allowing them to experience interacting with others, and take part in everyday scenarios like buying a coffee or visiting a doctor’s surgery (pictured) 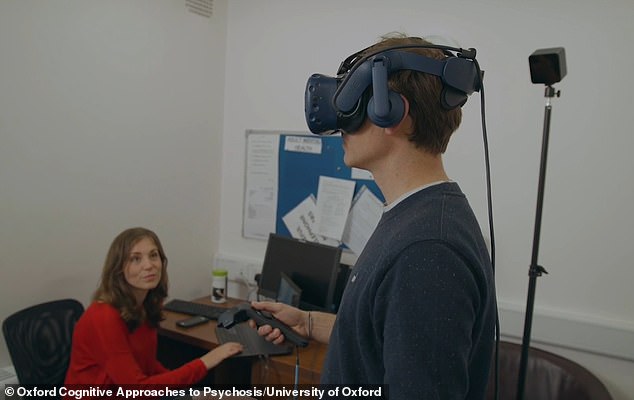 In the clinical trial, the virtual reality therapy worked well for patients diagnosed with psychosis

Psychosis is when people lose some contact with reality.

This might involve seeing or hearing things that other people cannot see or hear (hallucinations) and believing things that are not actually true (delusions).

The combination of hallucinations and delusional thinking can cause severe distress and a change in behaviour.

Experiencing the symptoms of psychosis is often referred to as having a psychotic episode.

gameChange was developed by a multi-partner team led by researchers at the University of Oxford and Oxford Health NHS Foundation Trust.

Results of a UK-wide clinical trial using gameChange, funded by the National Institute for Health Research (NIHR), have been published today in a new study.

‘Over the past 25 years VR has been used in a small number of specialist mental healthcare clinics. It has supported in-person therapy delivered by a clinician.

‘However, with gameChange, the therapy is built in, so it can be overseen by a range of staff. And it can be delivered in a variety of settings, including patients’ homes.’

gameChange targets a problem that is common in people diagnosed with psychosis – intense fears about being outside in everyday situations.

For many patients, these fears develop into a severe agoraphobia – a fear of being in situations where escape might be difficult or where help wouldn’t be available if things went wrong.

This means psychosis patients avoid leaving the home, which can severely disrupt relationships with family and friends, their education and careers. 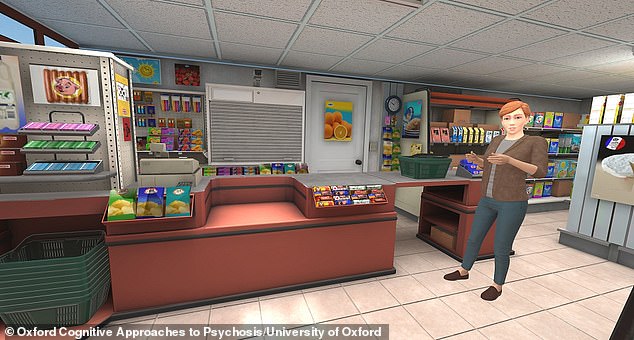 A virtual coach guides the patient through the programme. Here is the patient’s view of the experience, within a virtual corner shop 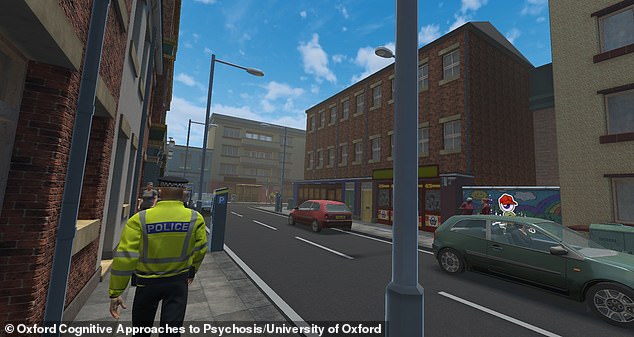 The gameChange virtual reality program targets a problem that is common in people diagnosed with psychosis – intense fears about being outside in everyday situations. Pictured, a virtual street 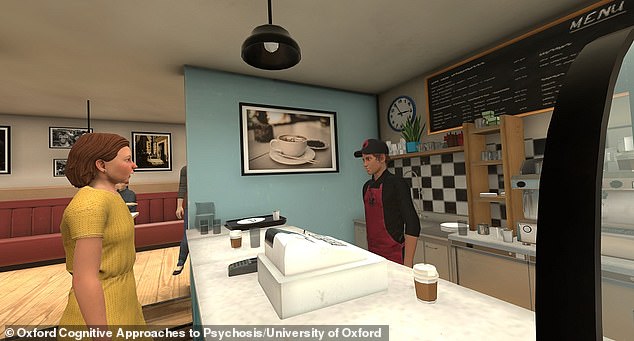 gameChange led to significant reductions in the avoidance of everyday situations and in distress. Pictured, a cafe

‘In a safe place, patients learn by doing, practising real-life activities such as buying a coffee or getting on a bus, which helps them develop the confidence to take on real-world challenges.’

Researchers found the platform led to significant reductions in the avoidance of everyday situations and in distress.

Patients who benefitted most significantly were those who found it hardest to leave the house, and those with most psychiatric symptoms, such as severe anxiety, depression, delusions and hallucinations.

Researchers also found the benefits were maintained when they followed up with the patients six months later.

One gameChange trial patient said: ‘If anyone has the opportunity to do the virtual reality treatment, I really would recommend it because it’s made a lot of difference to me.

‘After seven years of illness, I do feel so much better. I’ve been able to make eye contact with people more, without feeling really anxious, I’ve been able to walk down a street without worrying about anyone walking towards me. 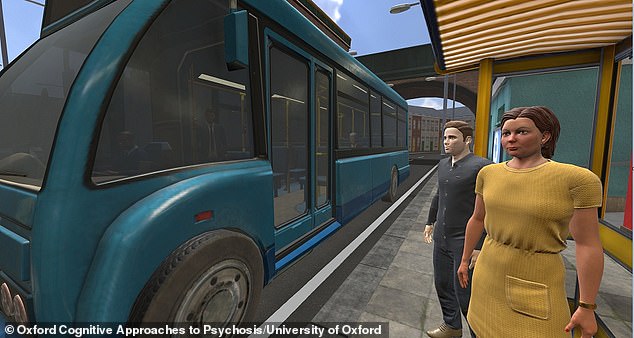 Patients who benefitted most significantly were those who found it hardest to leave the house, and those with most psychiatric symptoms, such as severe anxiety, depression, delusions and hallucinations 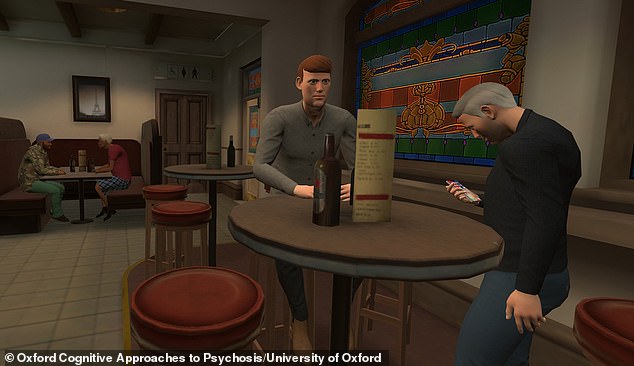 A shortage of clinicians has meant that access to effective psychological therapies has limited, say

A shortage of clinicians has meant that access to effective psychological therapies has limited, according to the research team, especially for psychosis patients.

The trial has shown that VR tech offers a cheap, effective and fun alternative.

‘We are delighted that gameChange has produced excellent results for people with some of the most challenging mental health problems,’ said Professor Freeman. ‘Individuals who were largely housebound have got back outside.

‘Using today’s affordable and easy-to-use consumer VR equipment, we think gameChange will lead a transformation in the digital provision of evidence-based psychological therapy, with deployment at scale for treatments that really work.’

The results have been published today in The Lancet Psychiatry.

Virtual reality is a computer-generated simulation of an environment or situation.

Virtual reality is the term used to describe A three-dimensional, computer generated environment which can be explored and interacted with by a person.

That person becomes part of this virtual world or is immersed within this environment and whilst there, is able to manipulate objects or perform a series of actions.

How is virtual reality achieved?

Virtual reality is usually implemented using computer technology. There are a range of systems that are used for this purpose, such as headsets, omni-directional treadmills and special gloves.

These are used to actually stimulate our senses together in order to create the illusion of reality.