Eau Claire resident Tiffany Moua grew up speaking Hmong with her family. But as she got older, she started to lose some of her vocabulary and found herself struggling to remember words she didn’t use frequently.

“You go to school, you speak English only,” Moua said. “I didn’t have any classes where they taught you in Hmong. So my Hmong language wasn’t utilized as much as I had wanted to.”

Moua was scrolling through Facebook one day when she saw a post about an iPhone app called HmongPhrases. The app allows users to look up words and common phrases, providing the spelling and an audio recording of how it’s pronounced.

Moua said she downloaded it, hoping to immediately test out her memory and her grammar. One of the first phrases she remembers looking up was “Can I pay for this?” or “Kuv them nyiaj rua qhov no puas tau?” — a question she had used before when shopping, but wasn’t sure if she was saying correctly.

“When you grow up and you don’t really speak fluent Hmong, you kind of create your own little sentences. You formulate your own way of saying things and it’s not always correct,” Moua said.

The HmongPhrases app was created by fellow Wisconsinite Annie Vang — who also happens to be Moua’s aunt. Vang, who is an iOS app developer from Madison, first built the program 11 years ago after taking an app development course at Madison Area Technical College. She said she was inspired by advice from her professor, who encouraged her to build something that she was passionate about.

“Google Translate didn’t exist at that time and the Hmong language definitely was not in Rosetta Stone or any of the other language apps that were out there in the app store,” Vang said. “So I took it upon myself that, you know, I want people to know who we are, who I am, and I felt that it was important to just have a presence in the app store and leave a digital footprint.”

Vang said she is always looking for ways to improve the program, taking feedback directly from users and from her parents, who are her primary beta testers.

“My mom helps me test the words, just to make sure, like a gut check, that I’m pronouncing them right. And my dad also is double-checking the words to make sure that they are correct and spoken correctly,” she said.

Vang’s parents speak different dialects of the language, with her father speaking in Hmong White and her mother speaking primarily in Hmong Green. Vang said it was important to her that every word and phrase is recorded in both dialects, especially because many materials are only presented in Hmong White.

“I feel like a lot of Hmong Americans are losing their Hmong language. But a lot of it is Hmong Green that’s not represented. I feel that if I didn’t try to keep a digital footprint of it … we might lose that,” she said.

Vang said she’s gotten some surprising requests from users about what content they would like to see added to the app. Most recently she’s been working on adding more medical terms and Hmong names from parents hoping to use them for babies.

In the world of app development, Vang said building a program is only the beginning and developers are constantly updating and improving their apps. She’s already dreaming up ways to make HmongPhrases “smarter,” like guiding users through a practice conversation and using natural language processing to allow the app to form words automatically or respond to voice and text.

“If only Siri could understand Hmong, that would be awesome,” Vang joked. “I really see that myself in the app five years from now.”

Through it all, Vang said it’s been the support from the Hmong community that has motivated her to keep going. She admits to being nervous about releasing the app at first.

“I’m not from a linguistic background, or I’m not an expert in the Hmong language,” Vang said. “I can only project what I know and try to grow from there. What I’ve received from the community is that they were very warm and welcoming to me and super proud and very encouraging. So I just felt reassured that what I was doing made a difference in the world.”

“I can hear that a lot in the kids that are growing up and are not speaking it fluently with maybe an elder,” she said. “Even my nieces and nephews do the same thing. When they say they’re hungry, it doesn’t have the right tone markers. So you can understand what they’re saying, but they may not know that they’re saying it more English than Hmong.”

This is something that niece and app user Moua said she appreciates about the program. Growing up, Moua said she spoke both English and Hmong to her parents, or sometimes a combination of the two, which she and other speakers call “Hmonglish.” She said her parents would rarely stop the flow of conversation to correct her because they understood what she was trying to say.

Moua said she now practices speaking Hmong with her friends and is motivated to keep learning.

“I can’t say that I’m going to be able to 100 percent speak Hmong, but it’s something that I want to be able to pass on to my children,” Vang said. “I think that it’s so important to know how to speak your native tongue.” 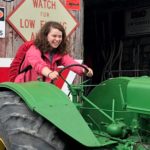 Hope Kirwan is a Wisconsin Public Radio reporter in La Crosse. She loves Wisconsin for its beautiful bluffs and excellent beers.